OK, so the image of the gearbox isn’t the best, but I haven’t separated it from the engine again since I put it back on to run the engine.  So, this weekend I’ll be, once again, separating it from the engine and starting the strip-down.  I’ve ordered a complete rebuild kit which includes the two clutch packs, both brake bands, ATF filter along with the usual seals and gaskets.  It won’t be here for a week, so that gives me plenty of time for a clean and to start the strip down.  This is part of the car that I know the least about. I have never stripped a manual gearbox, but have worked on them, but automatics are still surrounded in mystery for me. I’ve been watching YouTube videos and trying to understand the workshop manual in an attempt to get up to speed.  Those that know, say that as long as you are methodical, organised and follow the instructions to the letter, then there’s nothing really to trip you up. We shall see…..

So, this is what was greeting me when I started to strip the gearbox down.  Someone had been here already I think! 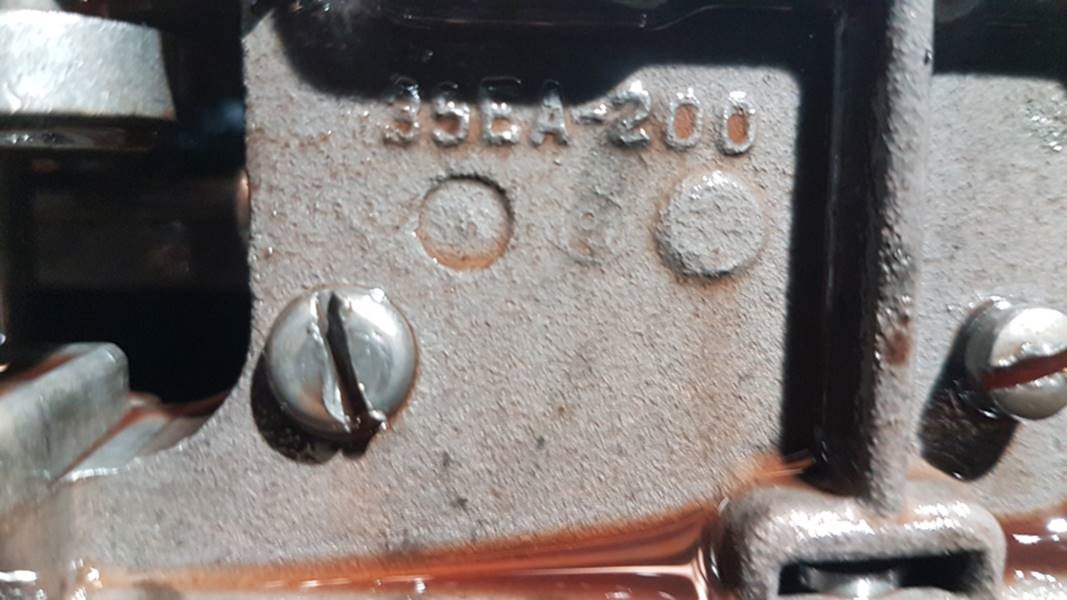 A really, really badly adjusted valve.  The arm was hardly making contact with the valve piston.  Second photo is how it should be. 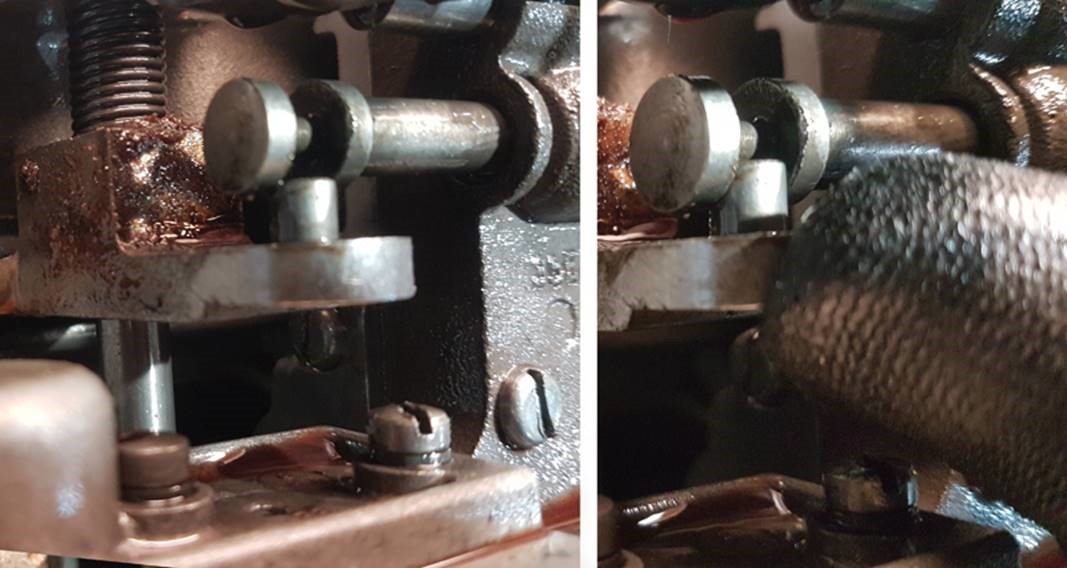 And then this….  This level of poor workmanship is totally unacceptable.  This is one of the oil feeds to the cooler, and it’s been cross-threaded and just forced in.  So much so in fact, that the gearbox casing has started to crack.  Oh boy! 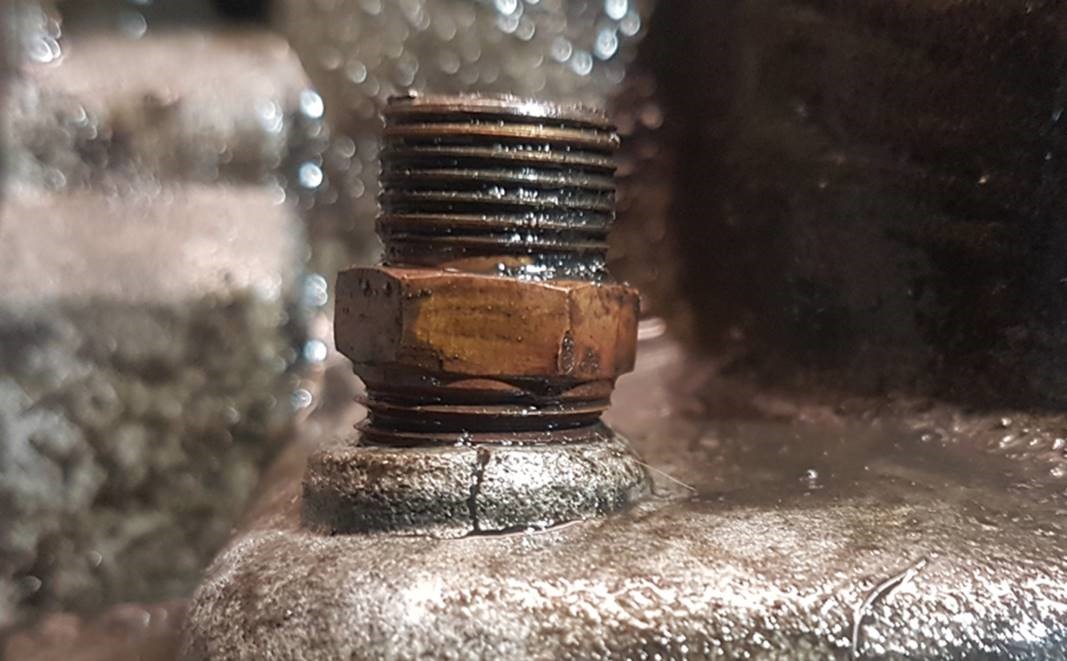 I attempted to drain the ATF (Automatic Transmission Fluid) from the sump, but the plug was absolutely stuck fast.  So I had to turn it upside-down over a bowl and drain it through the holes in the top. 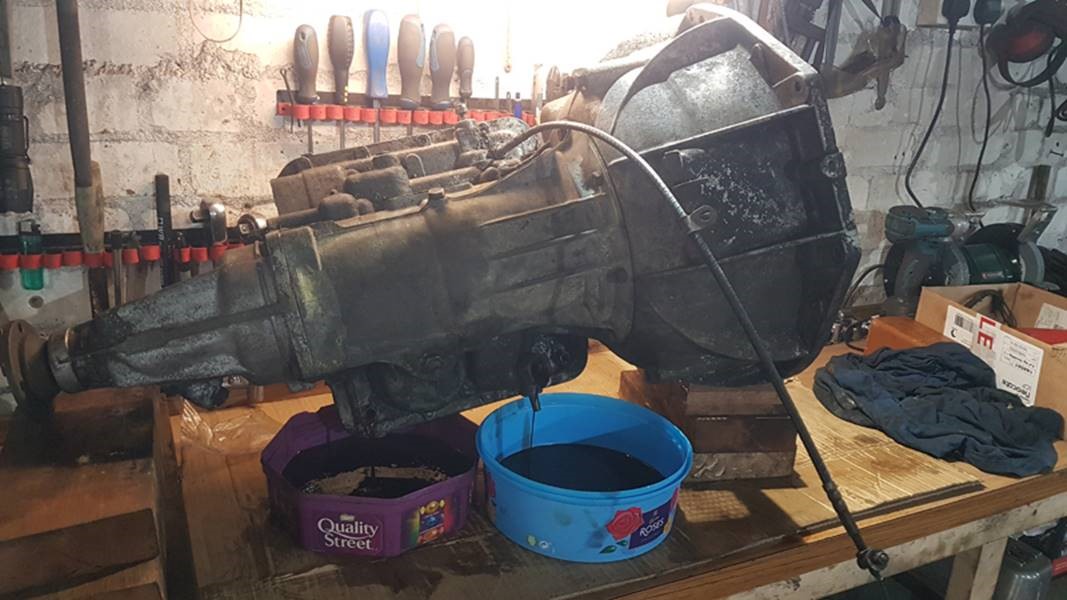 The remaining contents of the sump looked about as far from ATF as you could get. 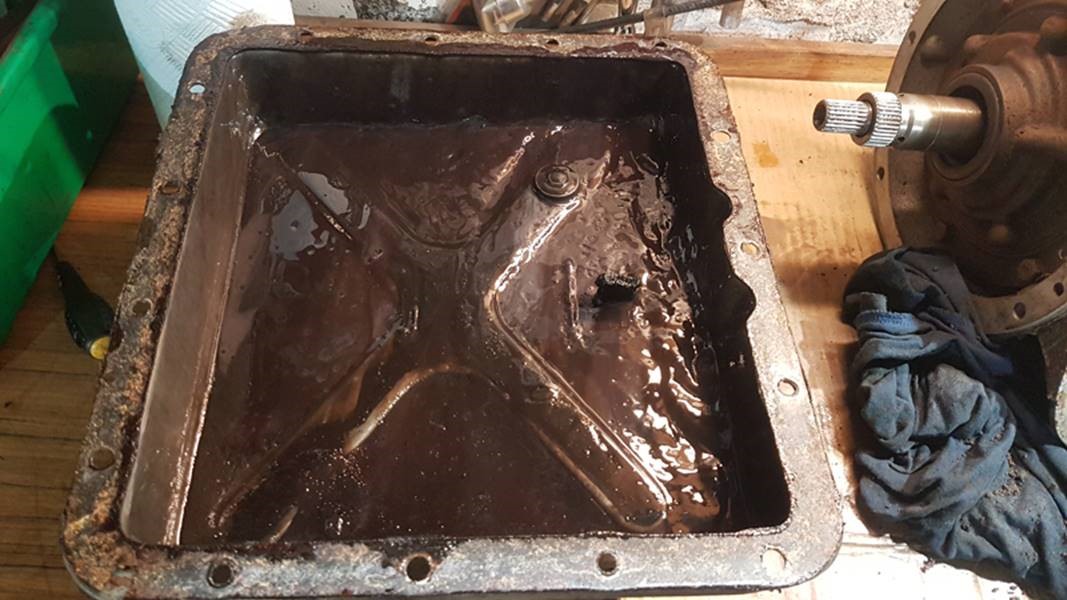 So now the sump was off, I could tackle the sump plug.  I used penetrating fluid, heat, hammer, more heat, more hammer.  But it was having none of it.  So, with progressively larger drill bits in the pillar drill, I reamed it out enough for it to loose it’s strength, and she gave way in the end with no real damage to the sump threads.  That was a close shave. 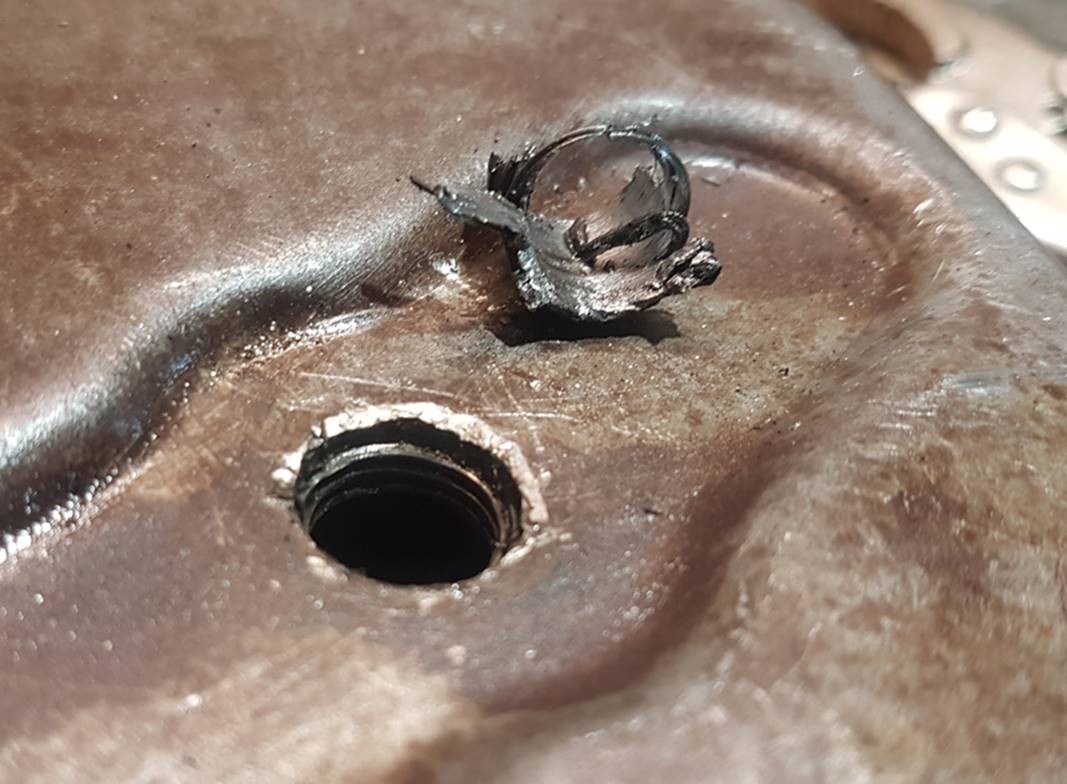 The valves and hydraulics look complex. 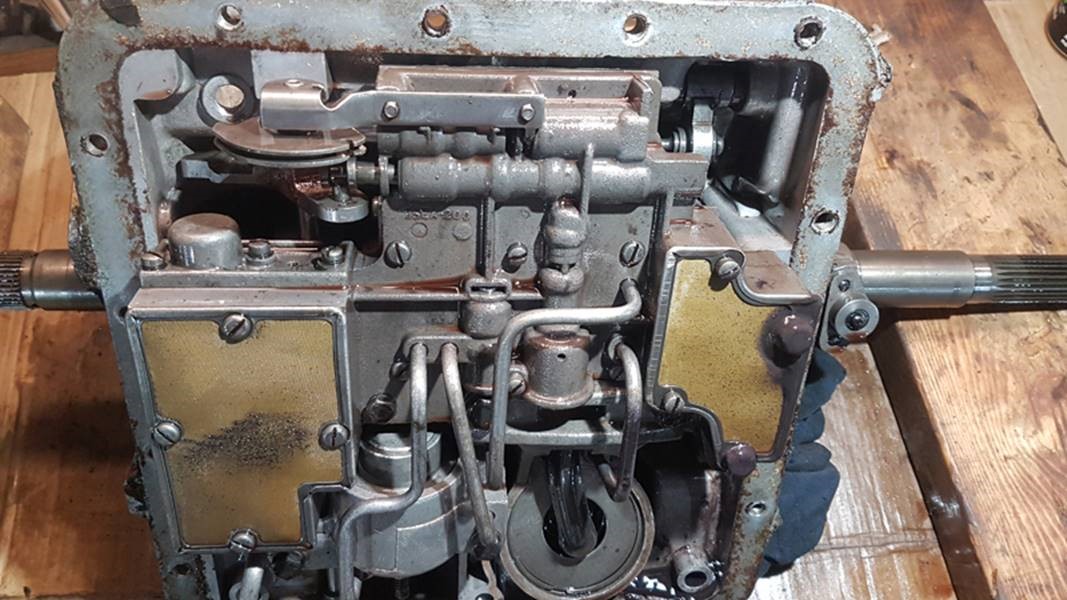 But once they were removed, the actual mechanical components are reasonably simple. It’s a 3 speed gearbox and it’s basically a big bearing with clutches and brakes to isolate the different components to alter the drive ratio. 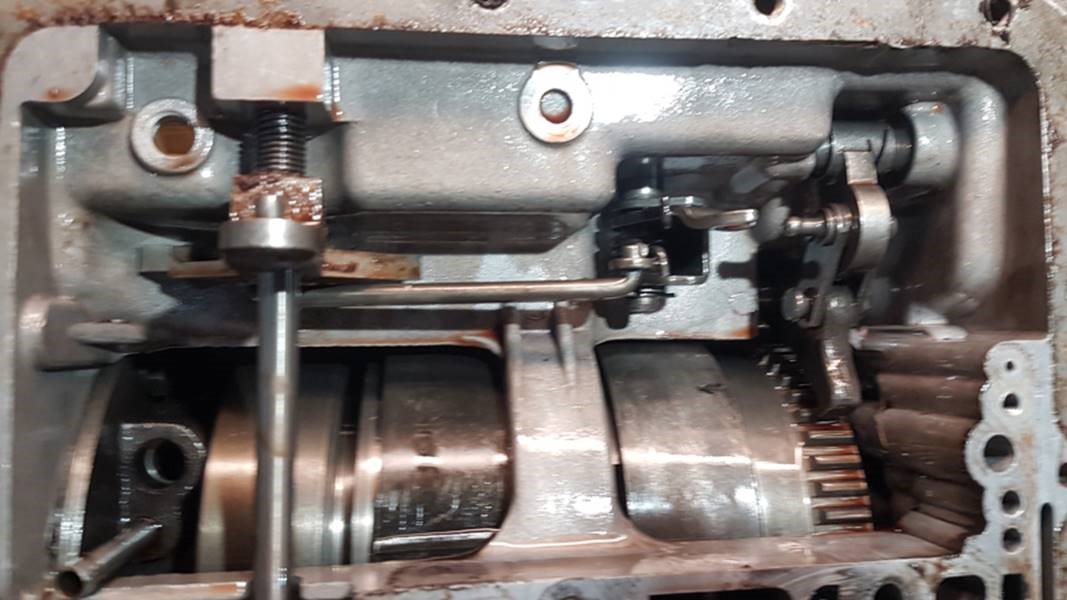 These are the planetary gears……….. 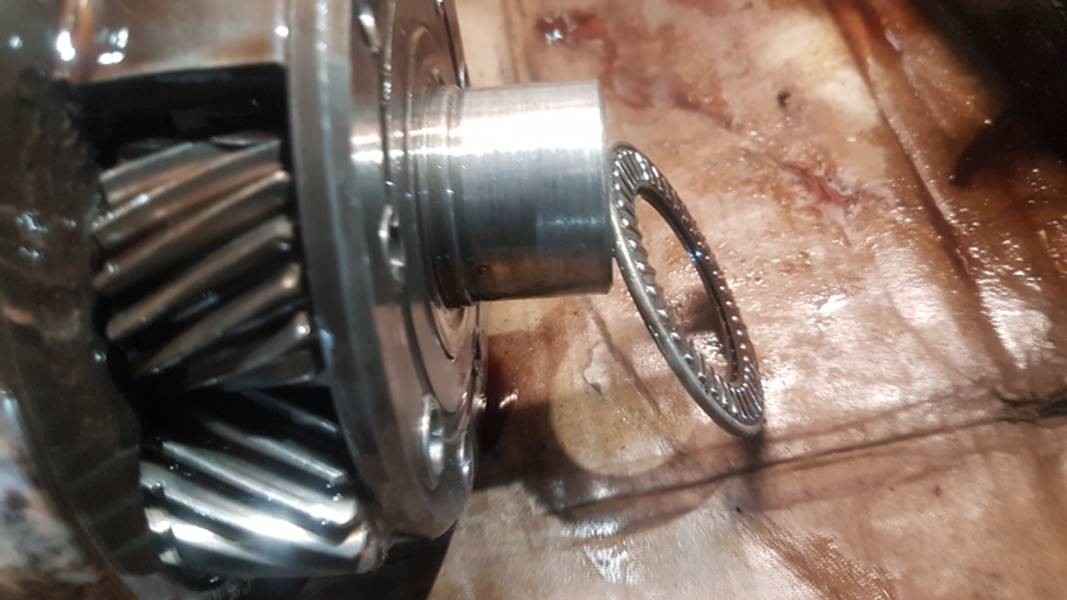 …which rotate around a central Sun gear. 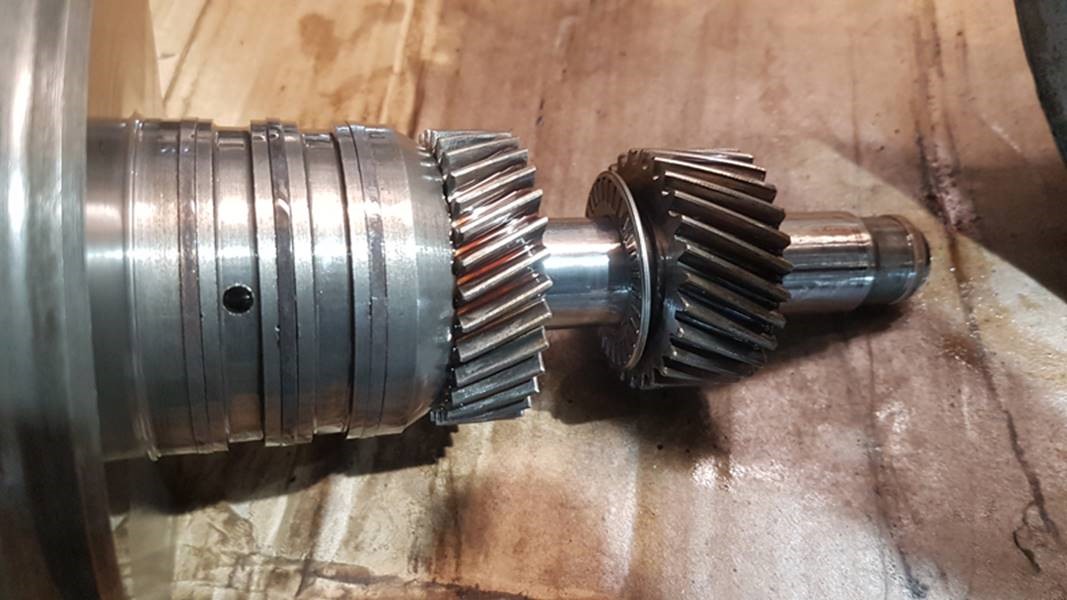 This is the front clutch, however both the front and the rear clutches were badly burnt. 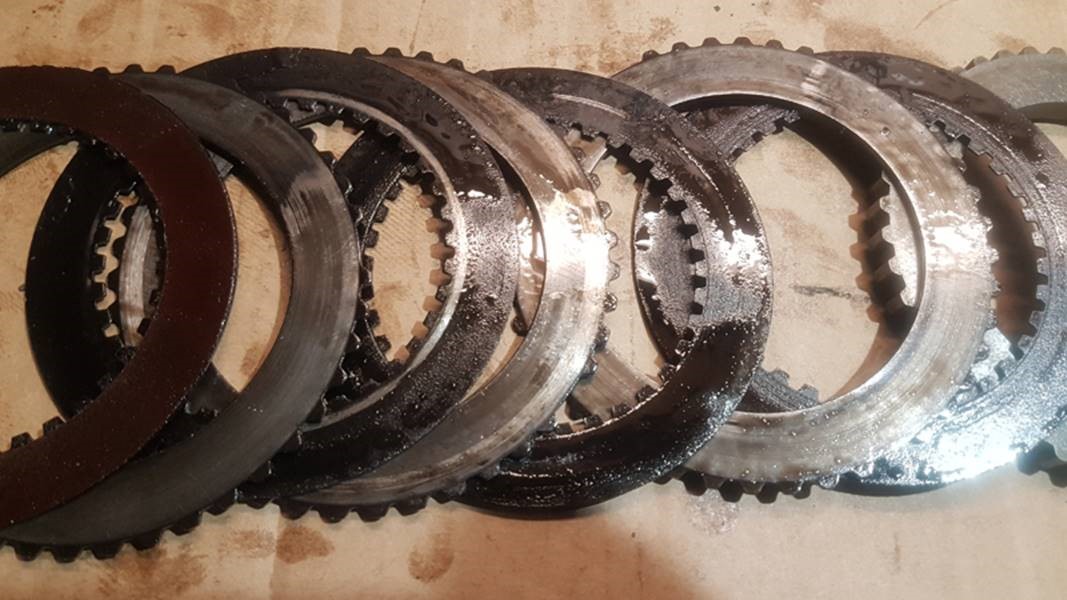 The rear one had even started to delaminate. 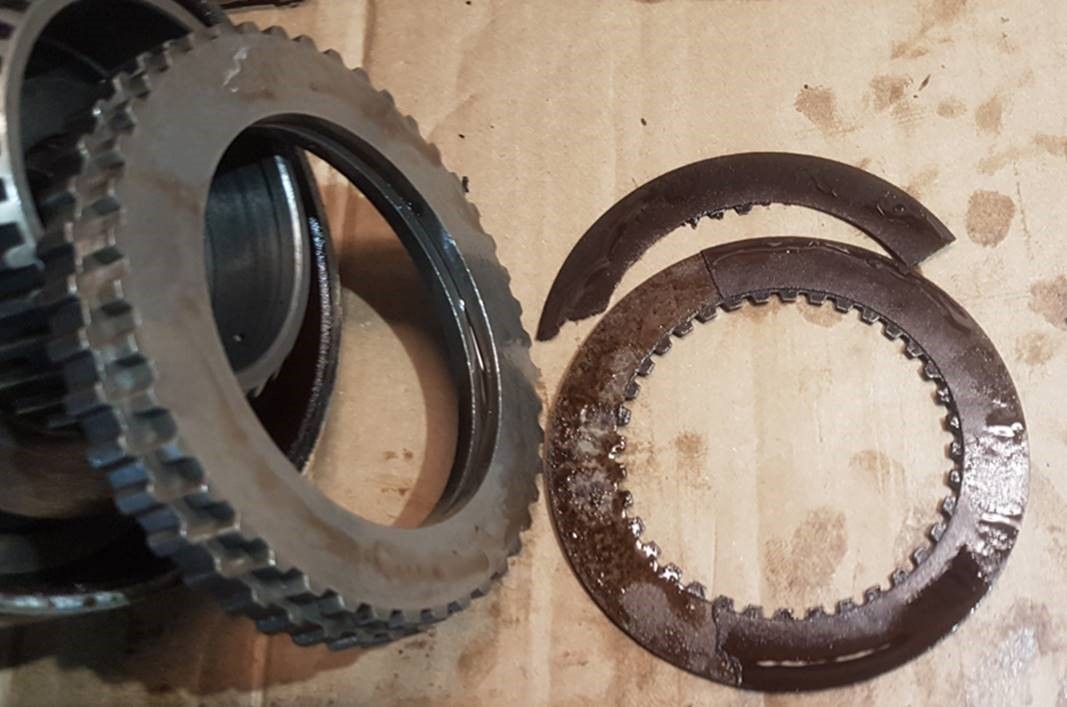 So, it’s safe to say the gearbox is long overdue a rebuild, and despite the shoddy workmanship of the previous rebuild, the actual components were in good shape.  The clutches and brake bands are included in the rebuild kit, along with all new seals and gaskets.  All of the main components have now been cleaned and I can start on rebuilding it as soon as the new parts arrive.

The rebuild kit I bought came from Australia as they are difficult to source in the UK, but arrived in about a week.  First to be assembled were the clutches.  This is a photo of the old components as they come apart.

The new clutches and seals were fitted and then reassembled and fitted back into the case along with the new brake bands. 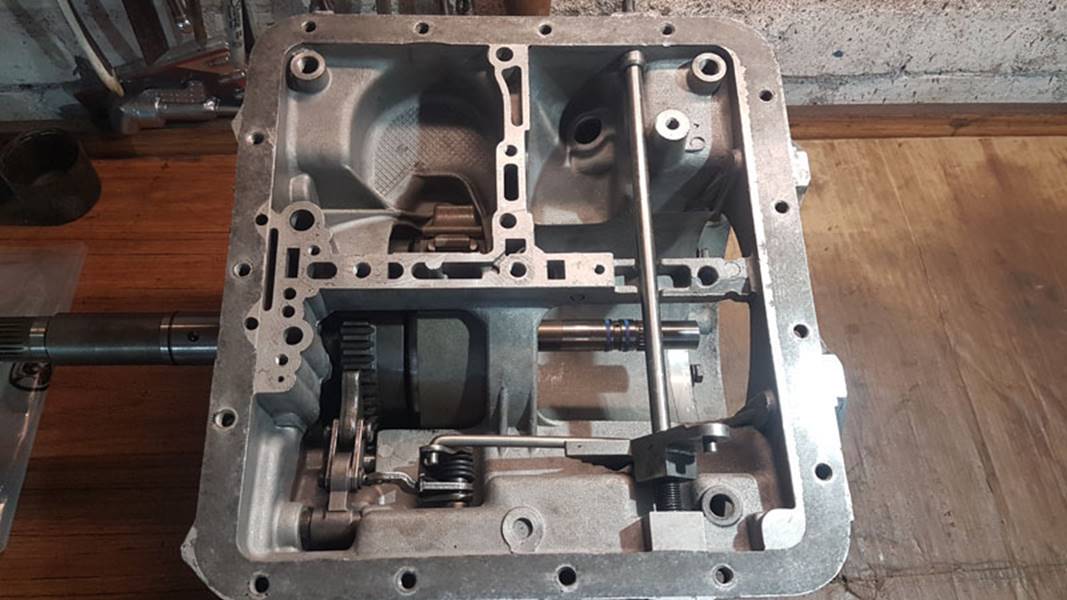 The second clutch followed suit (apologies for the poor image, excitement must have been getting the better of me…or nerves!) 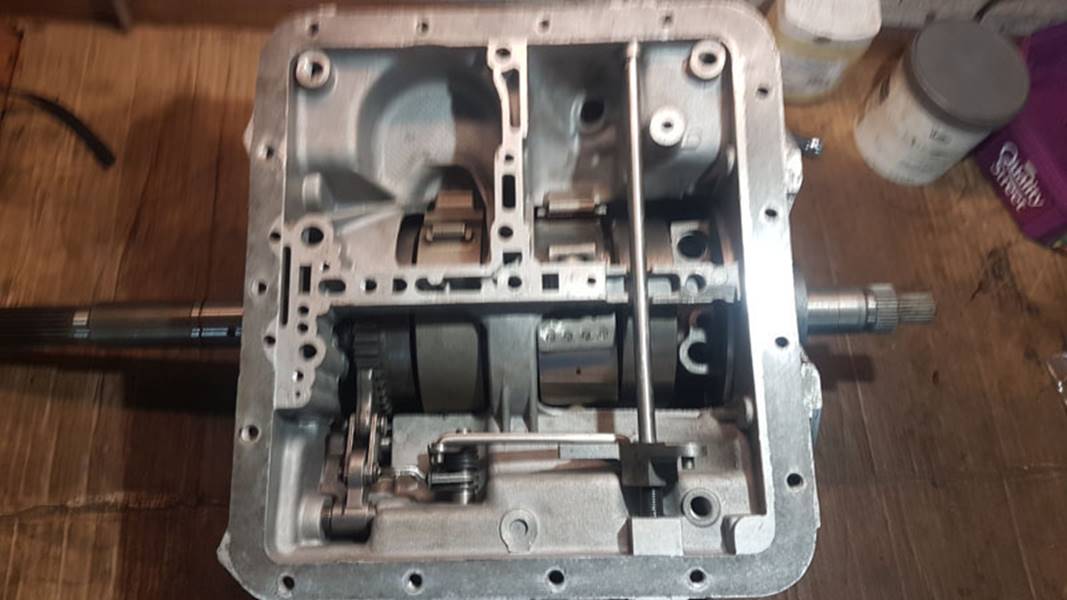 The selector rod was fitted, and despite evidence of previous mistreatment, actually adjusted up quite well.  You’ll see how well in a later shot. 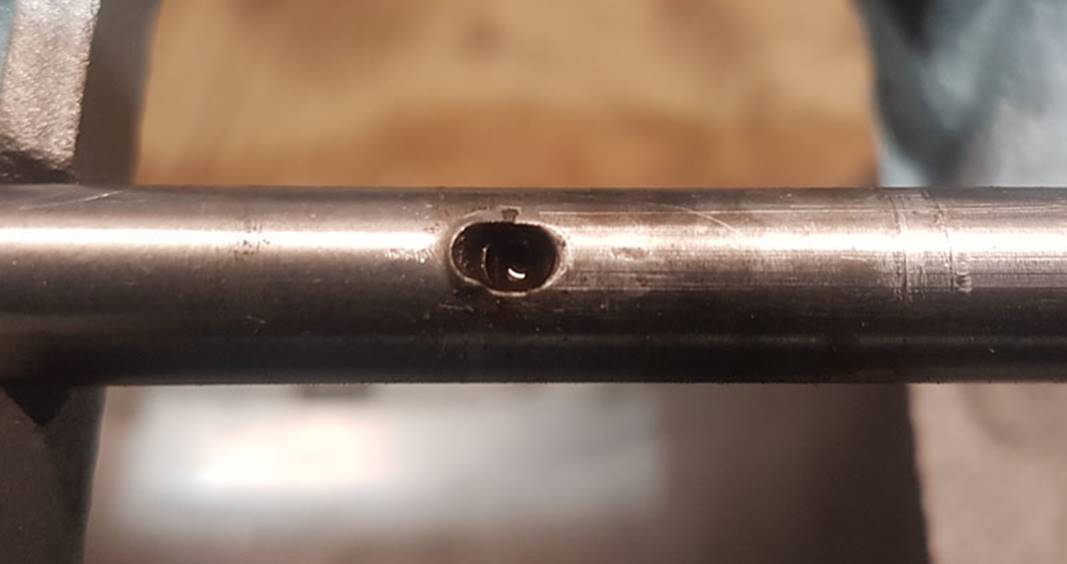 The valve body is as terrifying as it looks. There are so many valves, springs, collets, ball bearings, clips and other paraphernalia that all jump out as soon as you remove the cover.  Not a time to be dropping things on the floor. But after some head scratching and referring back to the photo’s I’d taken along the way during dismantling, it went together quite smoothly after a good clean. 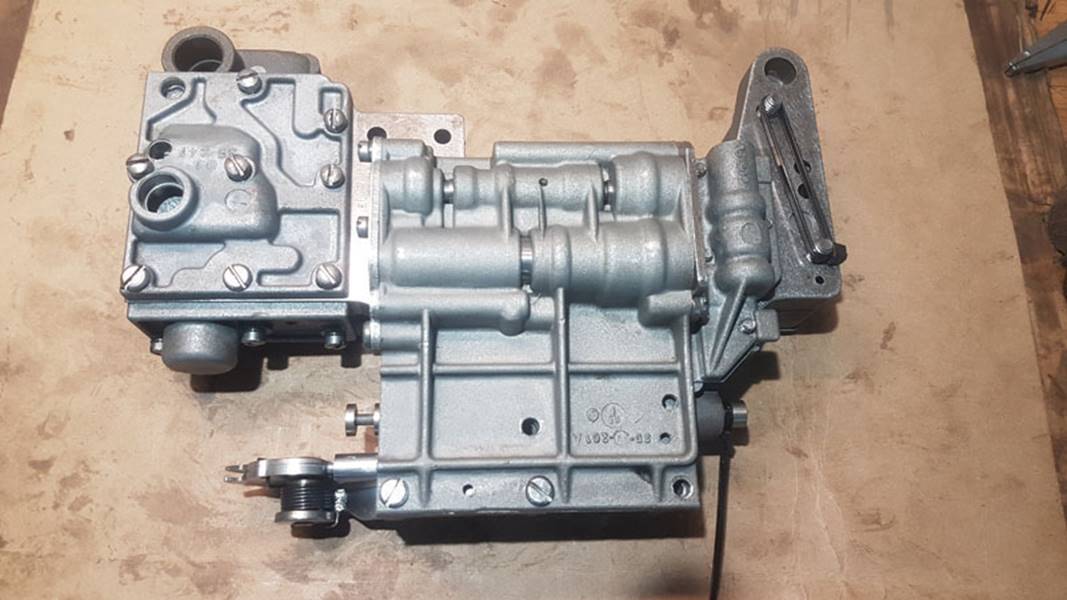 New filters fitted to the pick-ups. 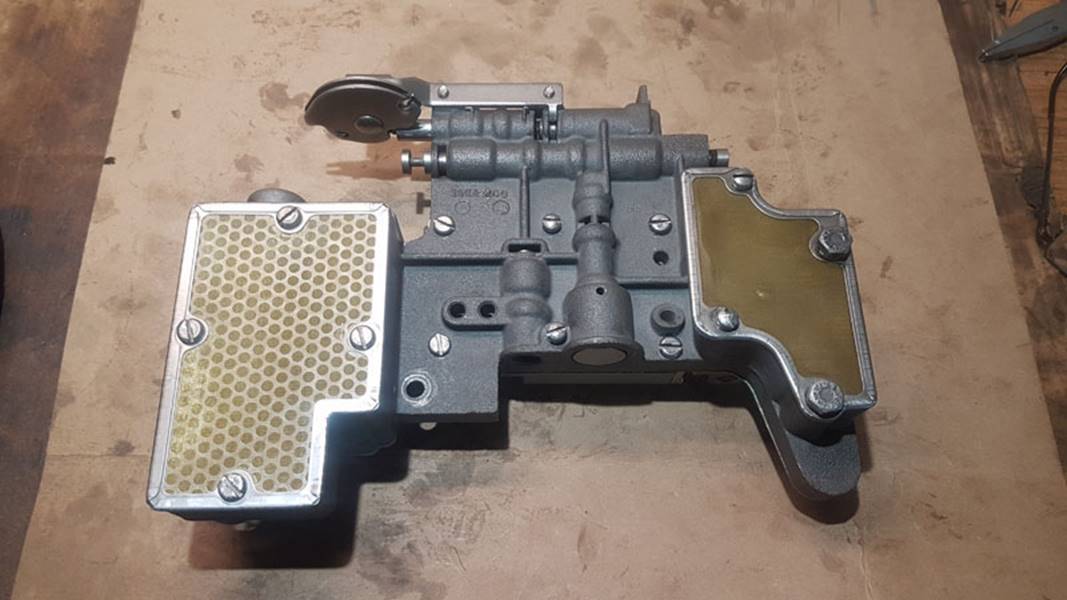 Here you can see the valve tray fitted and the (now!) correctly adjusted gear selector fork engaging fully into the selector valve. 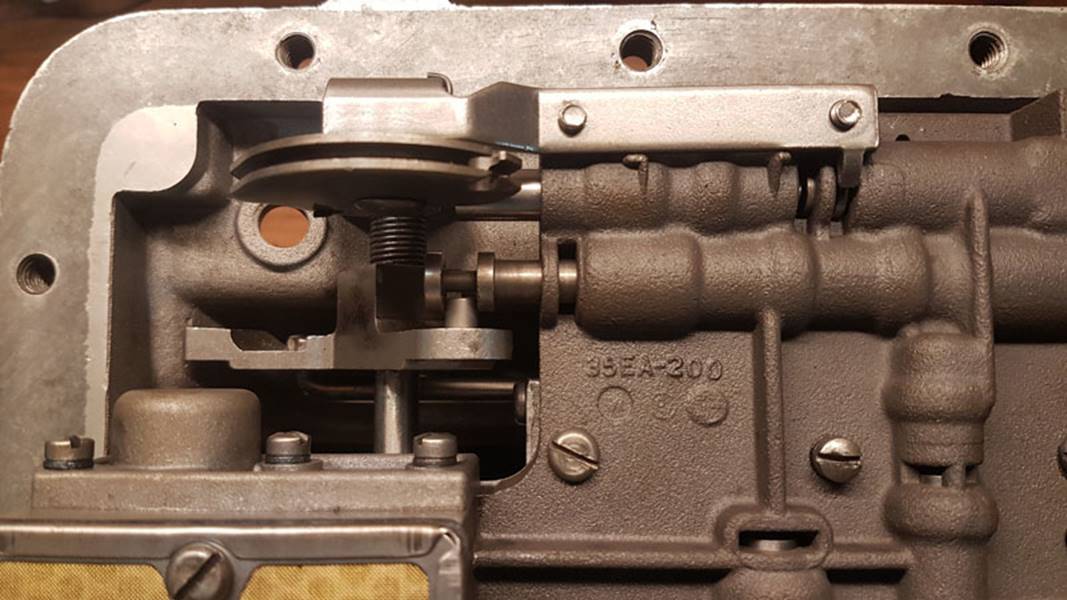 Next up, the servos which operate the brake bands.  These were really quite bad, and took some time to clean back to a good order.  The bores had suffered a little too and took a slight hone before they were good enough to give me confidence in reusing them. 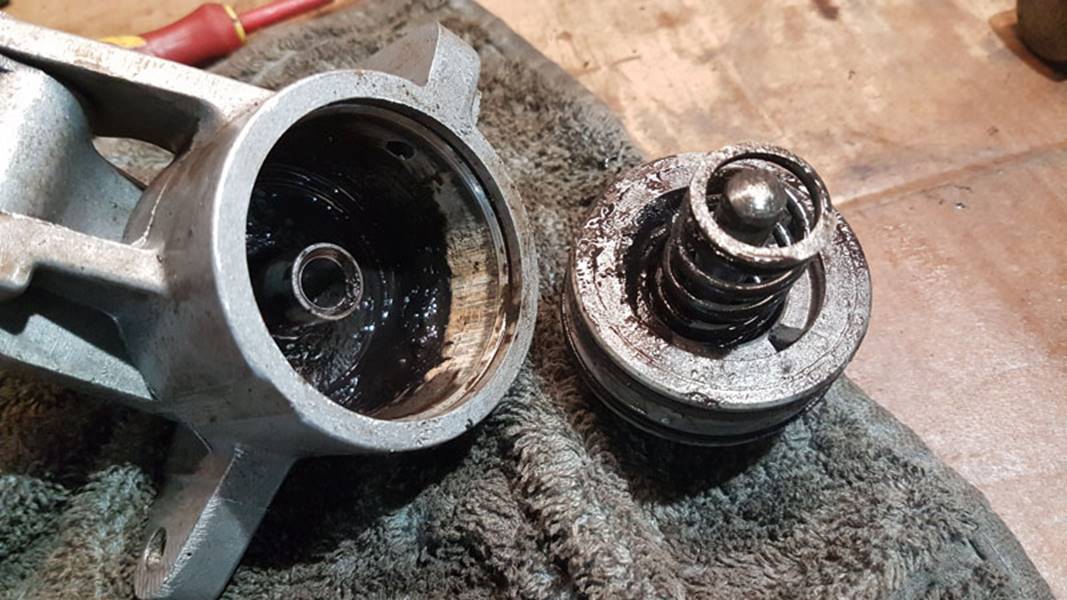 The seals were replaced as the old ones were clearly no longer usable!! 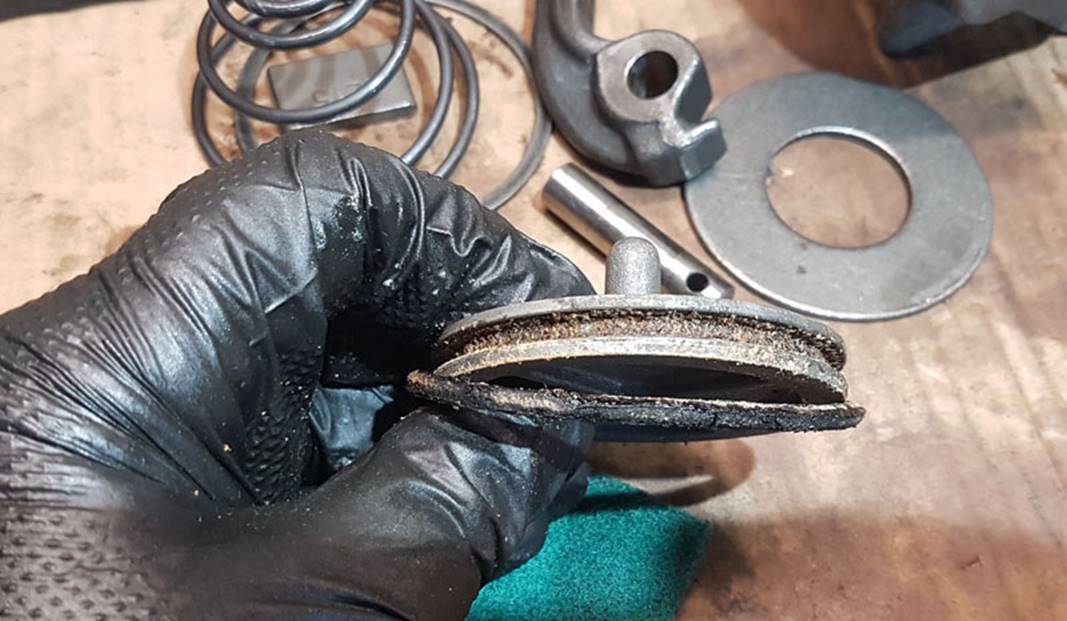 A smear of Vaseline (used instead of grease because it dissolves in ATF) and the new ones were ready to be fitted. 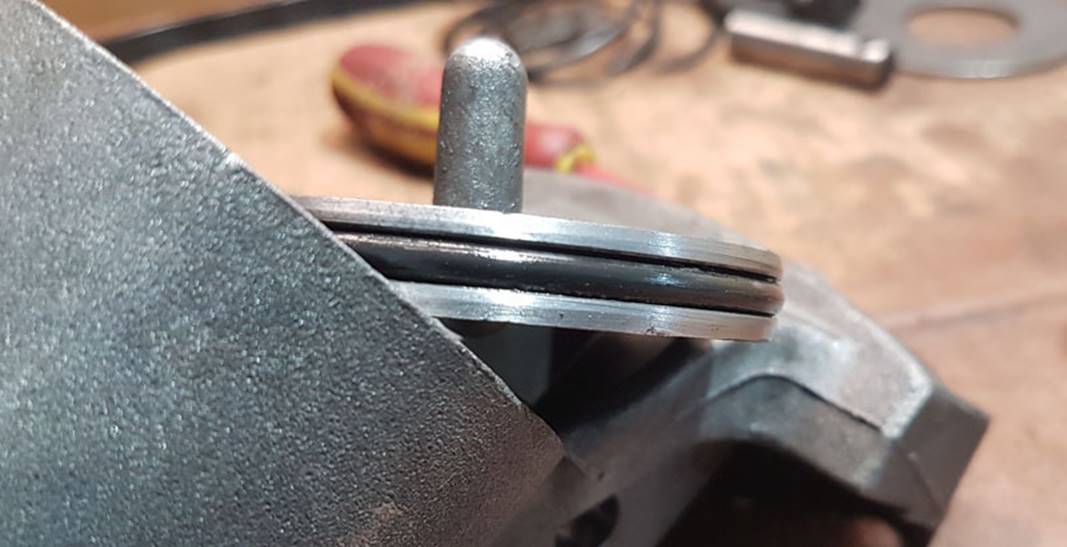 Here they are fitted.  Two different types for the front and rear bands. The one on the right (rear) is adjusted from outside the case, but the front one has to be adjusted with the threaded pin and locknut before closing it all up.  So it has to be spot on, or else a big hassle to re-adjust later!  No prizes for guessing which one I took most the time in getting right. 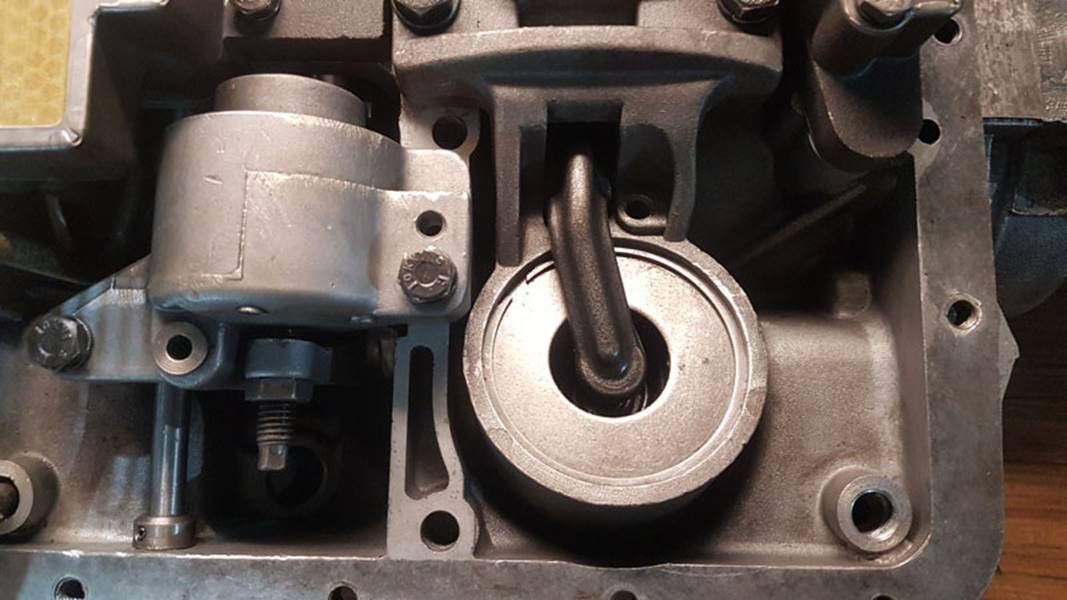 I fitted the sump with a new cork gasket, but gave it a nice coat of paint beforehand. 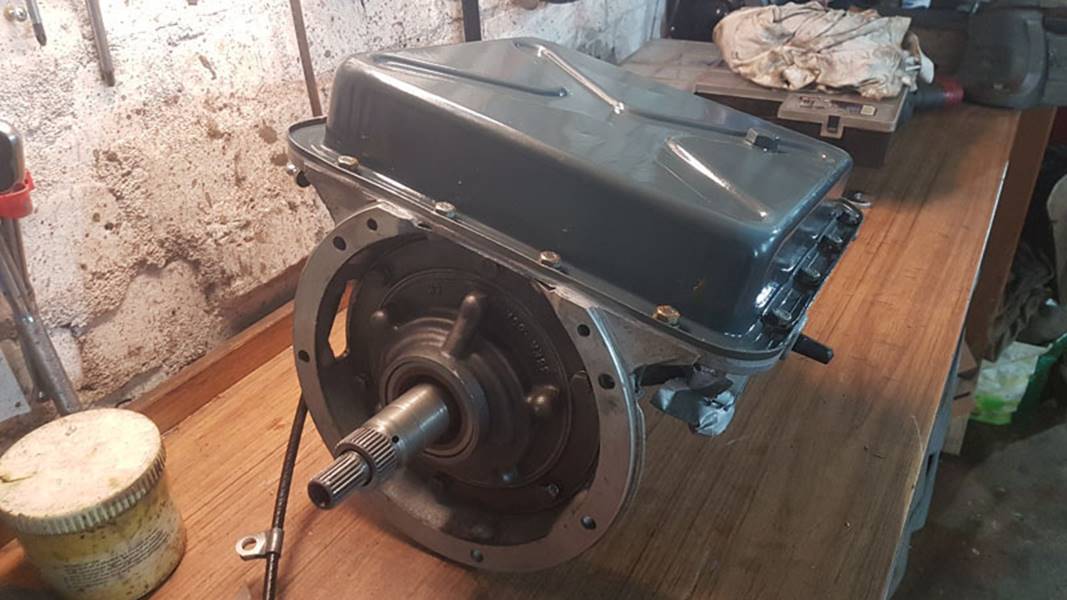 As with all automatic gearboxes, there is a switch which isolates the starter to prevent the engine being cranked over when in gear.  This doubles as a reversing light switch and is operated by a cam on the selector arm.  It has to be positioned midway between two predetermined points on that cam and again, it’s not a job that can be done with the gearbox in-situ, as the chassis rails prevent access.  With the aid of my multi-meter, I think I got it pretty much spot on.  There’s a fair bit of leeway I would imagine (hope!) so I’ve every confidence it will be fine. 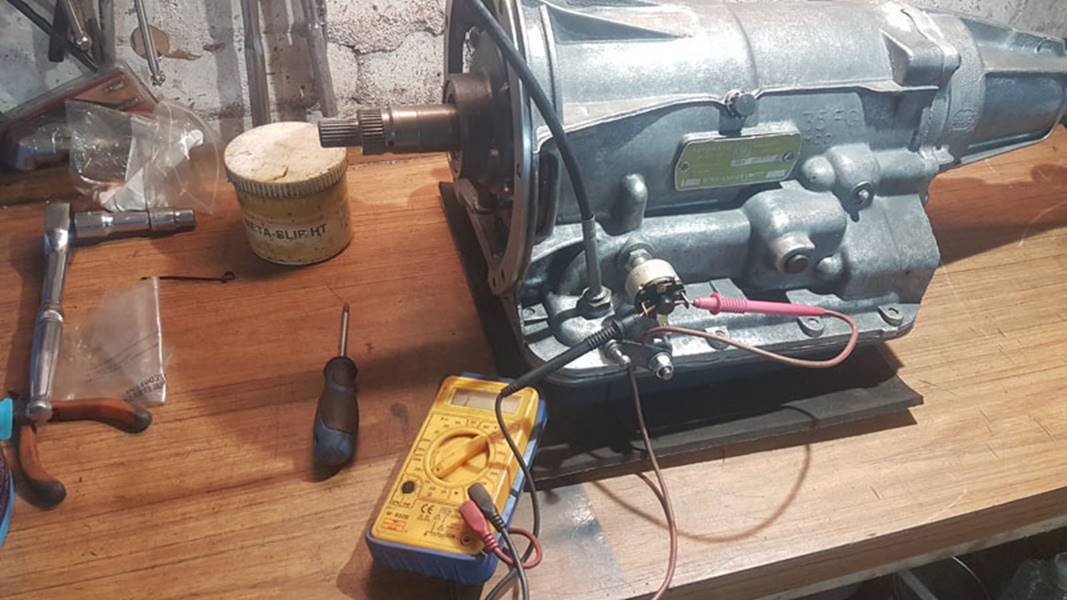 The old wiring was also in a terrible condition, so I made a new mini-loom for it.  I’ll be doing the rest of the wiring in the car too, so it gave me a taste of what’s ahead.  I have started using Tesa tape to wrap the wiring as it’s more flexible than regular PVC tape and looks a whole lot nicer. 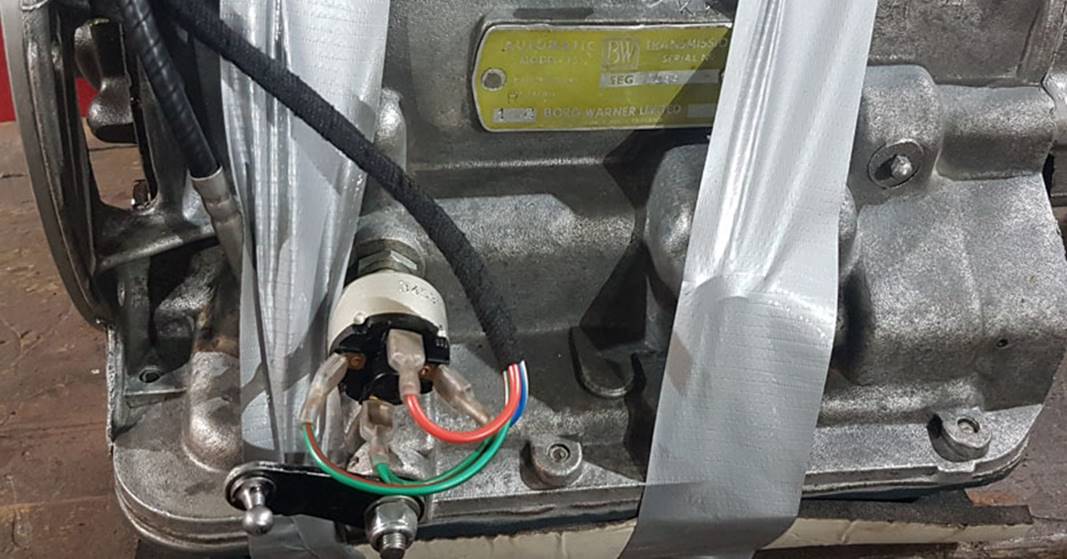 The only thing I’ve not refurbished myself during this build is the torque convertor.  It’s a specialist job and requires a huge lathe to cut the old one in two, then a special jig to weld the halves back together.  Oh, and the welds need to be totally leak free as the ATF is under a lot of pressure.  I obviously don’t have a huge lathe, and it’s best that this is done by the guys who know best anyway.

Here it is fitted to the starter ring. 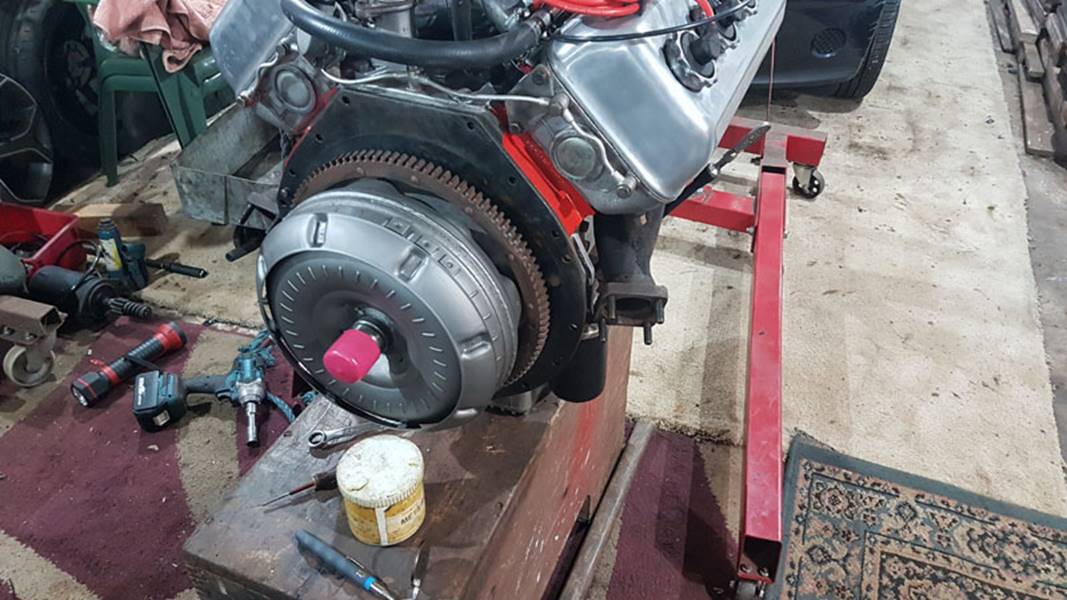 And finally, the engine and gearbox are re-united ready to be put back in the car. 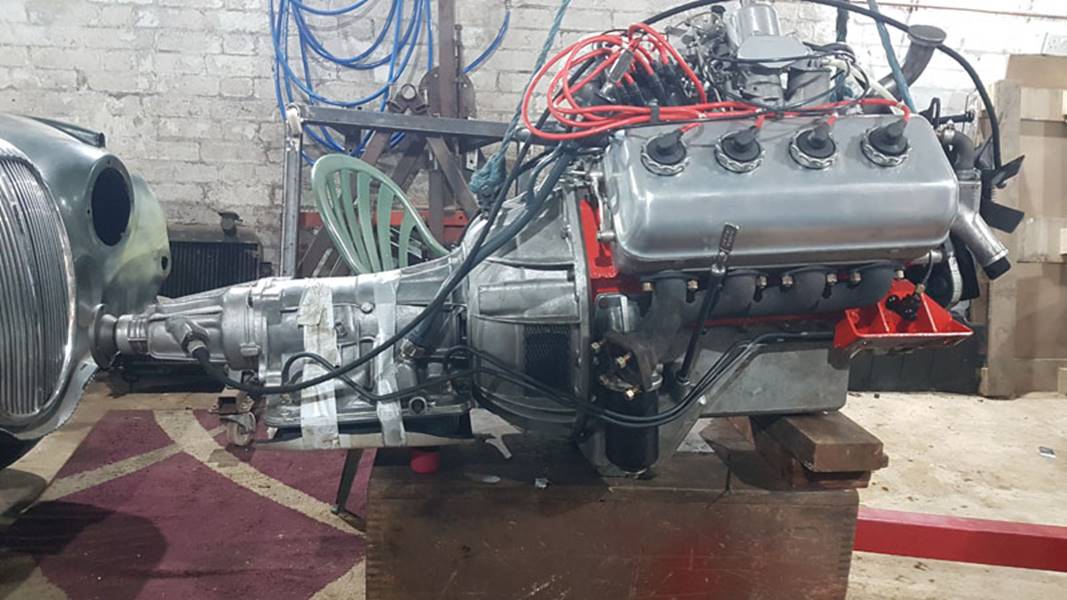