Engine Going Back In

It took a while after the engine and gearbox were back together to sort out the little things that would be difficult to do when it’s all back in the engine bay.  The speedo cable was cleaned and lightly lubricated to ensure a smooth operation.  The gearbox pipes to the oil cooler fitted back on, the gearbox dipstick (which doubles as a filler and breather) was painted and refitted.  The oil pressure gauge sender had rusted on the surface a little so that too was given some paint. Brackets fitted to clamp the cables securely for the gearbox switch.   The kick-down cable which runs from the gearbox to the carburettors was fitted and adjusted.

So this is where it’s going to fit. I had to remove the new brake servo as it would have been in the way.  A final check that all nuts and bolts were tightened correctly and it was time to get started. 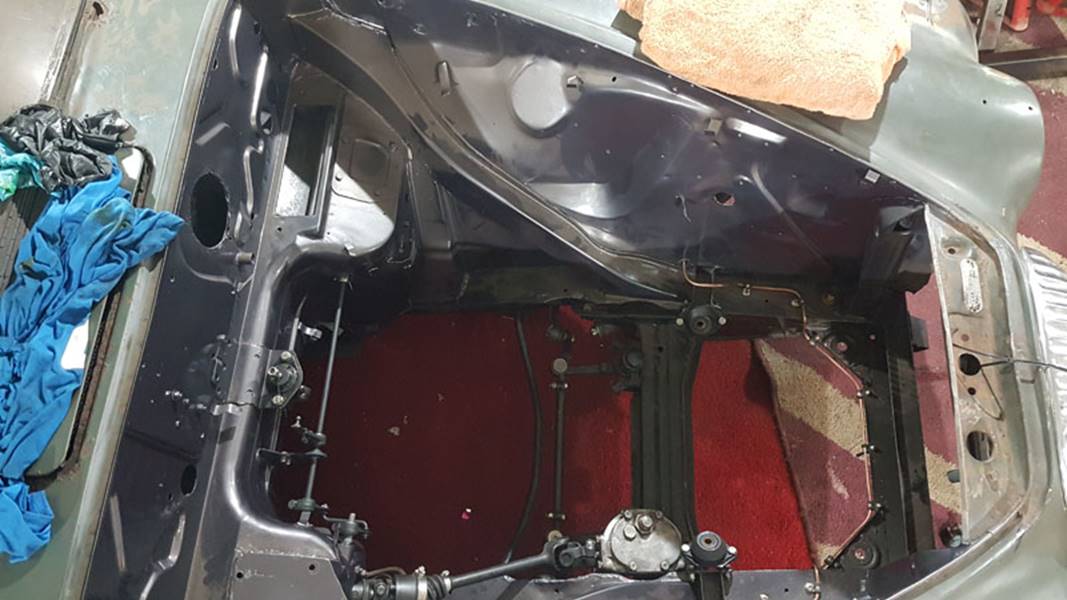 I placed some old towels on the engine bay to prevent my new paintwork getting scratched during the fitting. 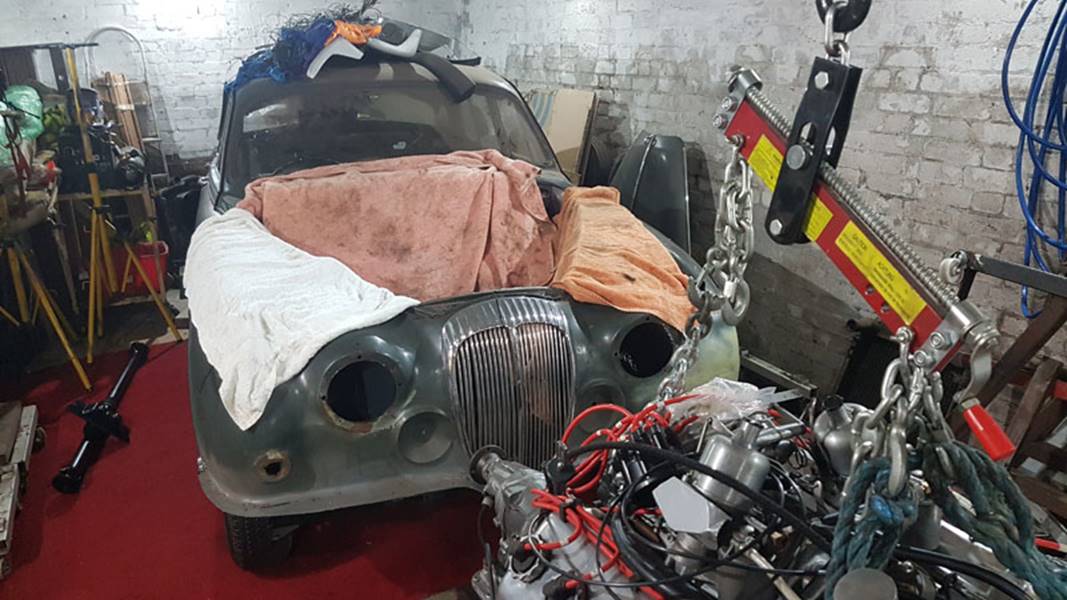 The gearbox slid over easily enough, but the engine sump was hanging too low to clear the bonnet slam plate, despite the hoist being at full extension.  I had to remove the road-wheels to give me the extra room before I could get the clearance I needed. 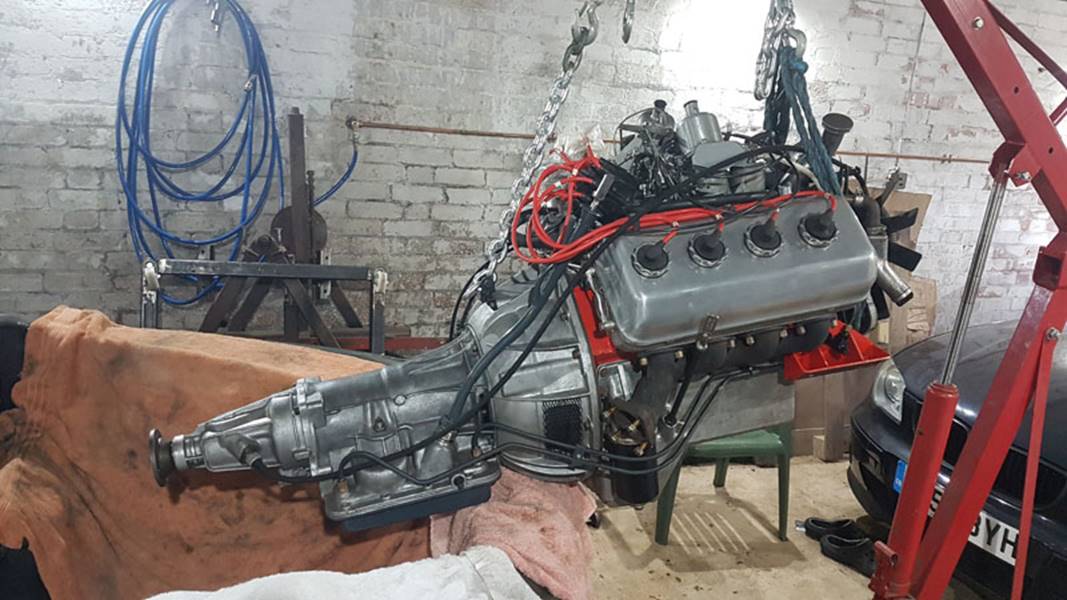 And she’s over the highest point. 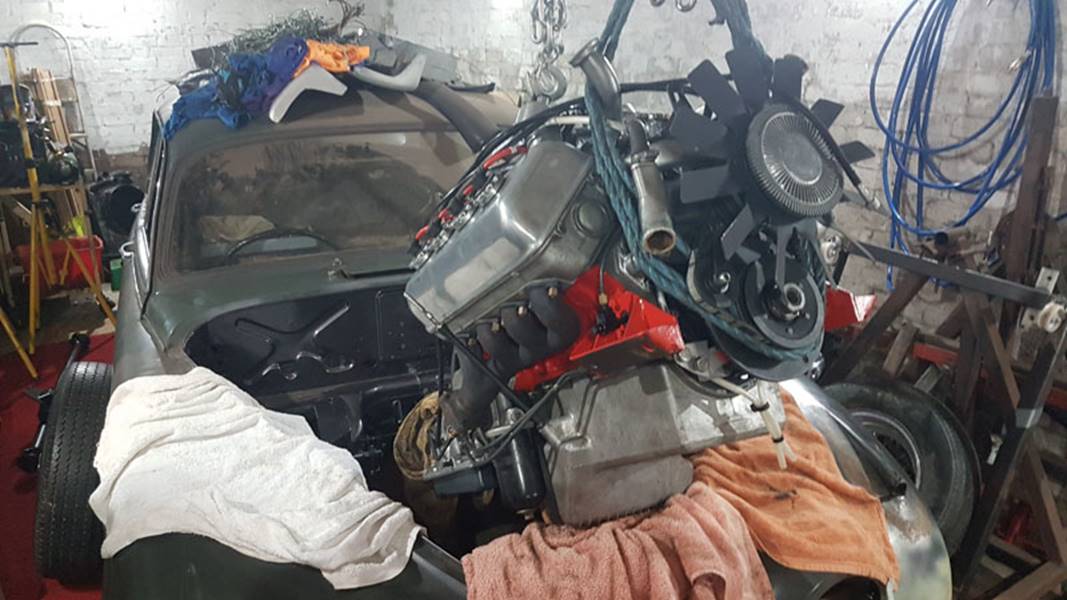 The gearbox rear extension is very long and everything needs to be angled steeply to get the angle to be able to slide it in.  Unfortunately, there’s not enough room between the transmission tunnel and the floor for it to fit.  So the wheels had to go back on! 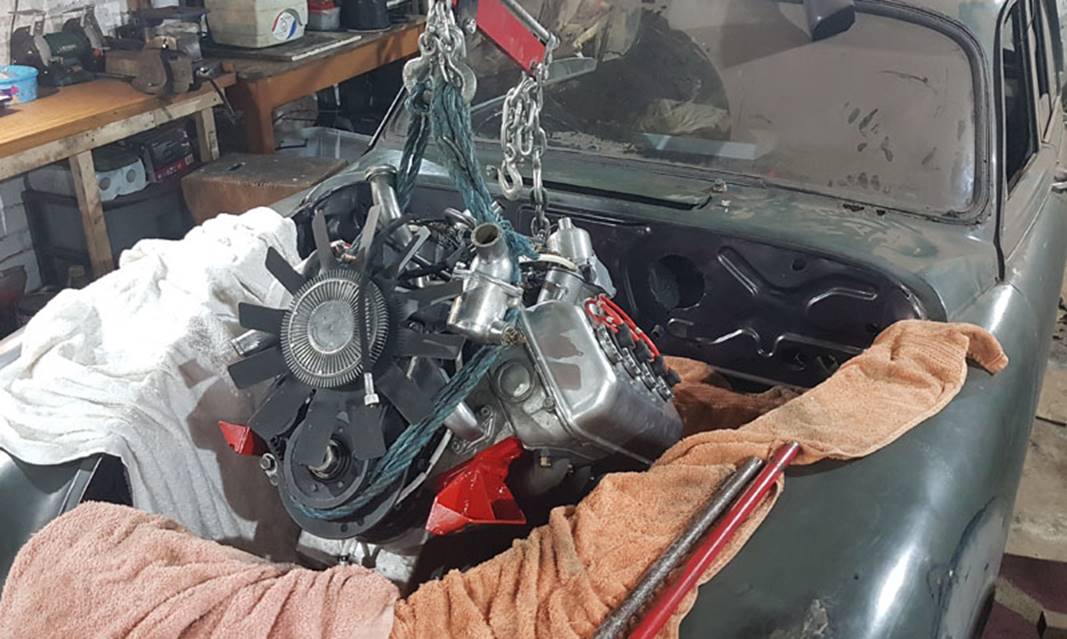 Once the gearbox clears the tunnel, the whole lot can be levelled out again. All of this levelling is accomplished with a hoist attachment that you can adjust to shift the balance point towards the front or rear.  You can see it at the top of this photo and it works really well.  I’m unsure if I’d have been able to get the engine back in without it. 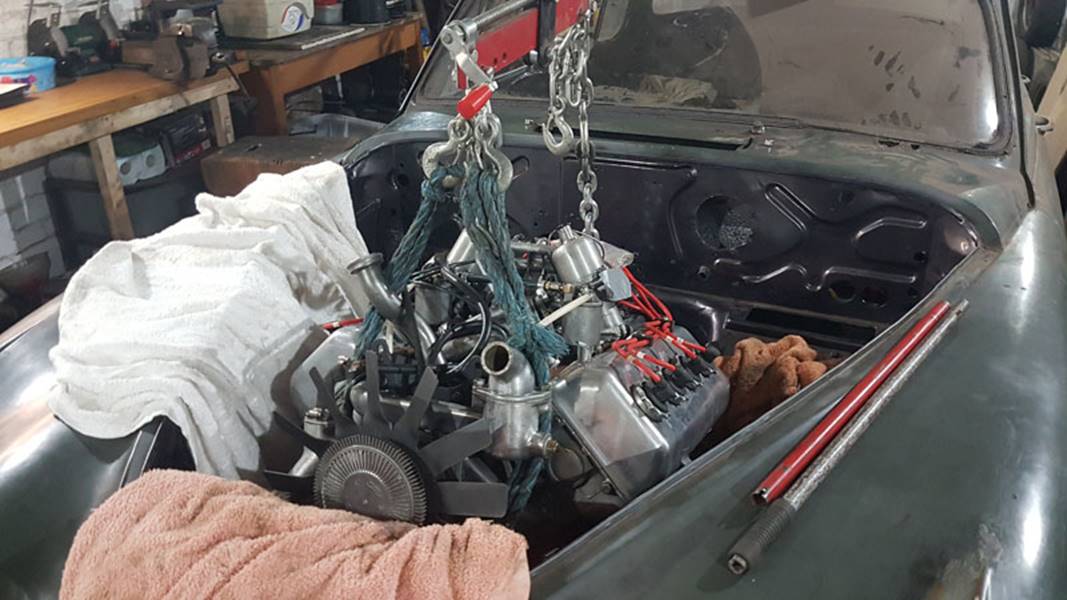 The engine sum also fouled on the steering arm, so I had to quickly remove it.  The taper fitting (similar to a ball joint taper) had become very tight despite being only recently fitted with a good coating of Copper slip.  Anyhow, after a frustrating 20 minutes, it was off and the engine settled to its final resting place.

The weight now being held on the new engine mounts, all of the lifting tackle was removed. 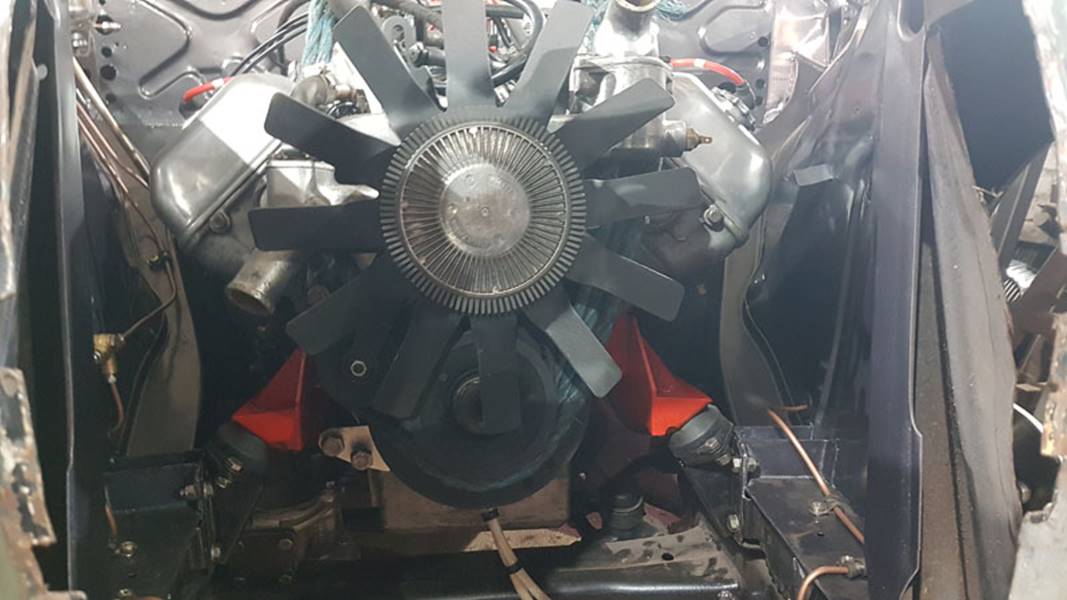 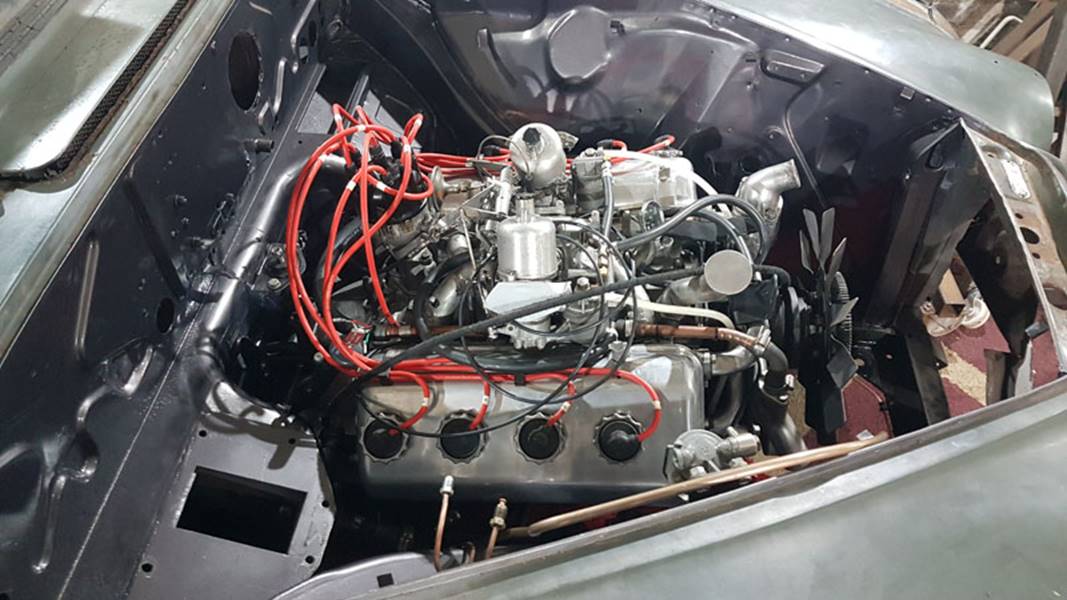 So all went well, although the oil filter canister had a couple of bumps on the way in which resulted in a couple of dents.  I’ll have a proper look when it’s removed during the 500 mile oil change, and if it’s too badly damaged I’ll replace it, although this will only be for aesthetic reasons as it’s still perfectly serviceable. 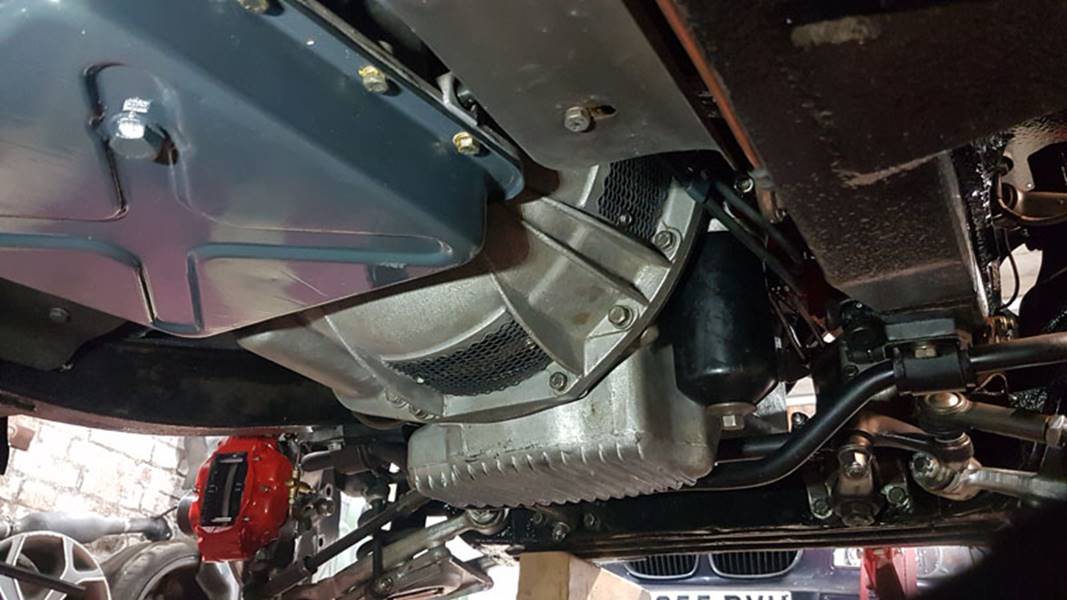 I refitted the brake servo and it has no problem clearing the engine, however it’s close to number 8 plug and I’m not sure I’ll be keen on changing it at service time.  I also fitted the propshaft but only loosely attached the centre bracket.  It needs to be aligned correctly to prevent vibrations, but I’ll leave that to when I have better access. 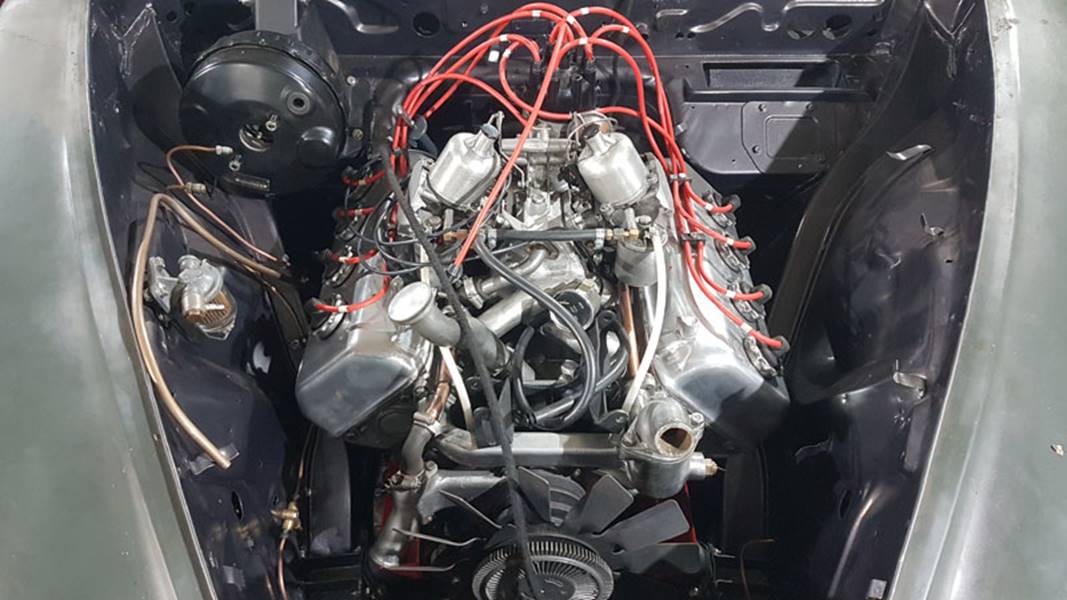